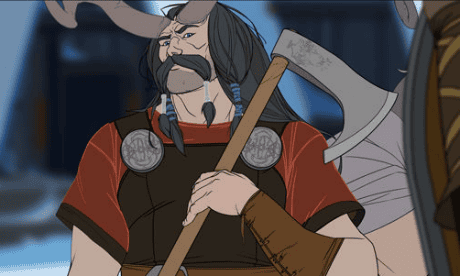 The sun is frozen in The Banner Saga’s sky, but its beams are yet to melt its ice-capped landscape. It has, however, thawed a video game genre that has somewhat languished in recent years: the Tactical RPG. Extravagantly funded by a ravenous crowd of Kickstarter patrons, designed by a team of ex-Bioware designers and artists, and scored by the Grammy-nominated composer Austin Wintory, this is exquisitely produced fantasy, marrying Game of Thrones-esque medieval war fiction with the intricacies of a Chess-like combat board game.

Off the battlefield, the team’s storytelling heritage is clear. These vast, Nordic landscapes share a whisper of DNA with Star Wars’ nether-planets, which the team previously crafted while working on Star Wars: The Old Republic. But the stories that fill them more closely share the family likeness. The game takes place under a broad sweep banner narrative involving nations and races (the canny humans, the hulking Varl giants and their common enemy, a dead-eyed statue people known as Dredge) on the verge of war. But the wonder is in the close-up vignettes, the pressures of leading a marching army of cold, hungry recruits, and the ever-present weight of having to make seemingly small decisions with unforeseeable consequences.

As you move your soldiers from place to place you watch as they inch across beautiful, hand drawn landscapes. The view is interrupted every few seconds with a narrative interlude, some problem or other than must be attended. One of your men may drink too much mead and brawl. You must intervene, choosing whether to force an apology from the aggressor or laugh off the scuffle. Or you might come across a ragtag band of men, seemingly lost in the woods. Do you allow them to join your ranks and gain a potential valuable asset, or turn them away?

You accept food from a benign merchant, but what if it turns out to be spoiled or, worse still, poisoned? Some video games dole out a handful of these multiple choice decisions per chapter. The Banner Saga is an endless flow of questions demanding immediate answers. The consequences must not only be lived with, but also open up further avenues of choice. Your men may fall. Do you discard the supplies or wait to see if something else is causing the sickness? Do you force the men to fight in the next battle, weakened by stomach cramps, or send them back home? Journey is story. Never has this been made clearer than in The Banner Saga.

The burden of leadership is made keener by the fact that you are free to make poor choices: enter a battle in which you are vastly outnumbered and your troops will fall. Rather than being booted to the melancholy purgatory of a Game Over screen, the story adapts to your failure, which the narrative then bears like a scar, forever altering its trajectory. It takes a little getting used to. But rather than reaching for the ‘load’ button to undo your mistakes, there is benefit to living with them. In time the story feels fully your own. You are no longer a video game player, pretending to be an active participant in a pre-set narrative. Instead you are a complicit protagonist, and the game bends to your will – good or ill.

On the battlefield this is a finely tuned yet somewhat traditional tactical RPG. You choose a selection of warriors and take turns with the AI to move them one-by-one about the gridded board. First you choose where to position a unit according to its range. Then you choose to attack an enemy, targeting either its armour or its health. The former indicates how many points of damage a character can deflect while the latter represents the amount of damage they can do, a number that ingeniously doubles for their health points. In this way, as units sustain damage, they are simultaneously weakened.

Different characters specialise in different classes: sheildmasters have high defense and are useful for forming a defensive wall in front of weaker characters; archers can attack from a distance yet are weak at short range; spearmen can attack foes two squares away and so on. Your characters earn Renown points every time they defeat an enemy and this currency can be used to increase their abilities or, alternatively, to buy stat-enhancing accessories.
Battle tactics

The strategic element to fights is rich. “Willpower” points can be used to increase a unit’s range or its offensive potency (and this limited, move-enhancing currency can instantaneously turn a battle’s tide). Strategic arrangement of your troops is key to success – the Varl take up four squares on the grid each, and will block both their comrades and competitors’ movements. In larger fights there’s even an option to continue the battle after it’s won, with the potential to defeat more of the opposing army’s soldiers, albeit with the increased risk of fighting with already weary and wounded men.

However, the consequences to actions on the field feel less keen than they do off. If one of your troops falls in battle, they resuscitate as soon as it’s finished, requiring only a few days “off” to recuperate to full health again. You cannot lose the key players in the drama on the battlefield, even if a few can be lost quite easily by making the wrong decisions elsewhere. This is, nevertheless, a game with a strong sense of place and the ambiance elevates it beyond the immediate competition. The illustrated 2D art is expressive, while Wintory’s score is nothing short of extraordinary – evocative, unusual and rousing. The designer Sid Meier famously said that a game is a series of interesting choices. It’s a maxim fully embraced by The Banner Saga, which stitches those choices into its very fabric to form a tapestry that is wholly your own.